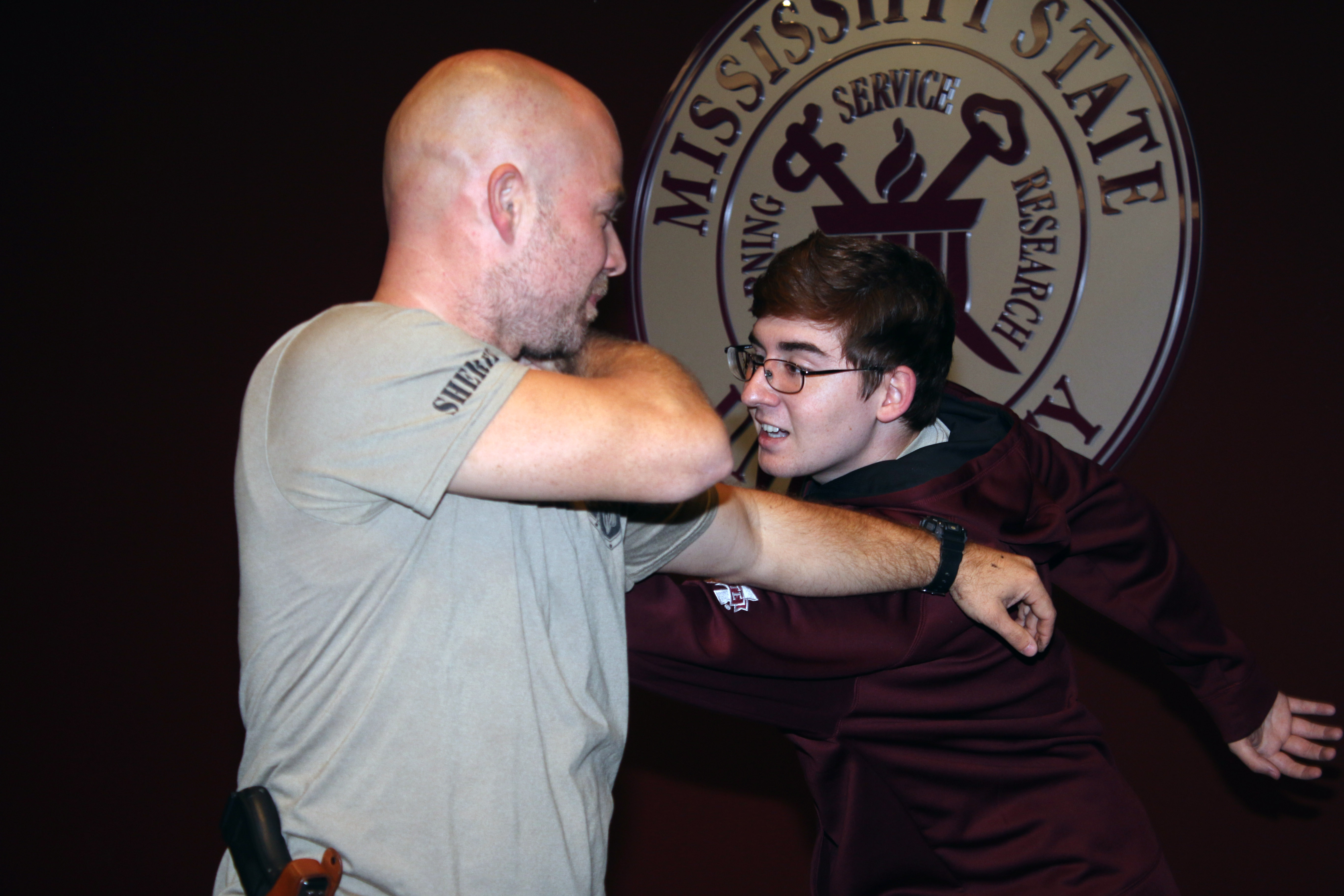 (MERIDIAN) - Rather than do a research paper, Tina Ladner, an adjunct professor in criminology at Mississippi State University-Meridian, thought her students could do something bigger: a victim services fair that put more than a dozen organizations under one roof.

Ladner, who works full time with the department of corrections as a director of electronic monitoring, teaches this semester course on victimology.

"And as we started talking about the different types of victims, I realized that there's only so much they can learn from a book or from watching TV," Ladner said. "I wanted to give them a chance to see their career in the field."

"Being a victim, even though you didn't choose it, it changes your life. It changes how you carry on with your life," Ladner said. "Even working in corrections, something people don't realize is that the people who are incarcerated were sometimes victims themselves."

While community members could browse through the booths, vendors said they used the fair as an opportunity to network and connect.

"One of the reasons our organization thought this was important was it gives us a chance to meet each other," Stacie Sharp, an outreach specialist with Soldier On, said. "Even though we might work with similar populations, we might not know about each other."

Sharp, meeting with Maya Edwards, of the Attorney General's Bureau of Victim Assistance, said, as an example, if Edwards had a victim from another violent crime who happened to be a veteran, Edwards could reach out to Soldier On for additional resources.

"This program takes in someone who is in danger of homelessness, whether they're on the streets or just received an eviction notice," Sharp said. "And the case manager finds them somewhere to live... sometimes, with landlords, just knowing that somebody is in (the veteran's) corner gives us a little bit more time to take care of everything."

Edwards, agreed on the need for collaboration.

"We call ourselves the best-kept secret but we don't want to be a secret," Edwards, a victim advocate, said. "A lot of times, people don't know we exist and that's why things like this are important."

Edwards' organization provides assistance to victims of violent crimes in two ways: financially and by walking them through the justice system.

"No one plans to be put in that situation. People think, 'Where do I go? Who do I turn to?' " Edwards said. "We can give them case updates, explain the process and make sure they know that they have rights and that those rights are protected."

Throughout the fair, from 10 a.m. to 3 p.m., Phillip Hendricks, a narcotics commander in Hattiesburg, taught self defense, demonstrating with Mason Kieter, a student in Ladner's victimology class.

"The most important thing is situational awareness," Hendricks said. "Paying attention to your surroundings."

Hendricks said he taught self defense classes, focusing on aggressive behaviors such as choking and grabbing.

"A lot of times, if someone gets in a bad situation or an abusive situations... people will freeze up and not know what to do," Hendricks said. "Practice makes perfect."

As a demonstration, Hendricks made his hand into a fist, poking one knuckle out as a protrusion to hurt the attacker. If someone attempted to choke him from the front, Hendricks used this fist to hit the attacker's hands and try to break the grip.

Whereas if someone attacked to choke him from behind, Hendricks tucked his chin underneath the attackers hands, which prevented his attacker from choking him.

"Some people might not want to do this, but then you should bite down hard on their hand," Hendricks said.

The fair ended with a victim's impact panel, giving attendees an idea of how violent crimes affect those left behind.

Toni Kersh's daughter, Kaelin Kersh, died two days after graduating from Mississippi State University on May 5, 2017. A state trooper going 100 mph without their lights or sirens hit the car Kaelin Kersh was in, Toni Kersh said.

In response, Toni Kersh pushed her local legislators to create a law, HB 1202 known as the "Kaelin Kersh Act" to require emergency vehicles to use their lights and sirens when traveling at 30 mph over the posted speed limit.

"Her legacy lives through (her family)" Toni Kersh said. "This law couldn't save Kaelin, but hopefully with this law in place we will save more Kaelins."

In honor of Kaelin Kersh's 23rd birthday, her mother decided to face the crowd at the victim's fair and give a voice to her daughter. Though Kaelin Kersh might be the victim of that accident, Toni Kersh sees it as her duty to carry on Kaelin Kersh's memory: her desire to pursue nursing, academic honors,  track career and constant smile.

"This was the right thing to do; so her legacy doesn't die at Mayhew Road and Highway 82," Toni Kersh said. "This isn't a job you'll ever think you have to have."