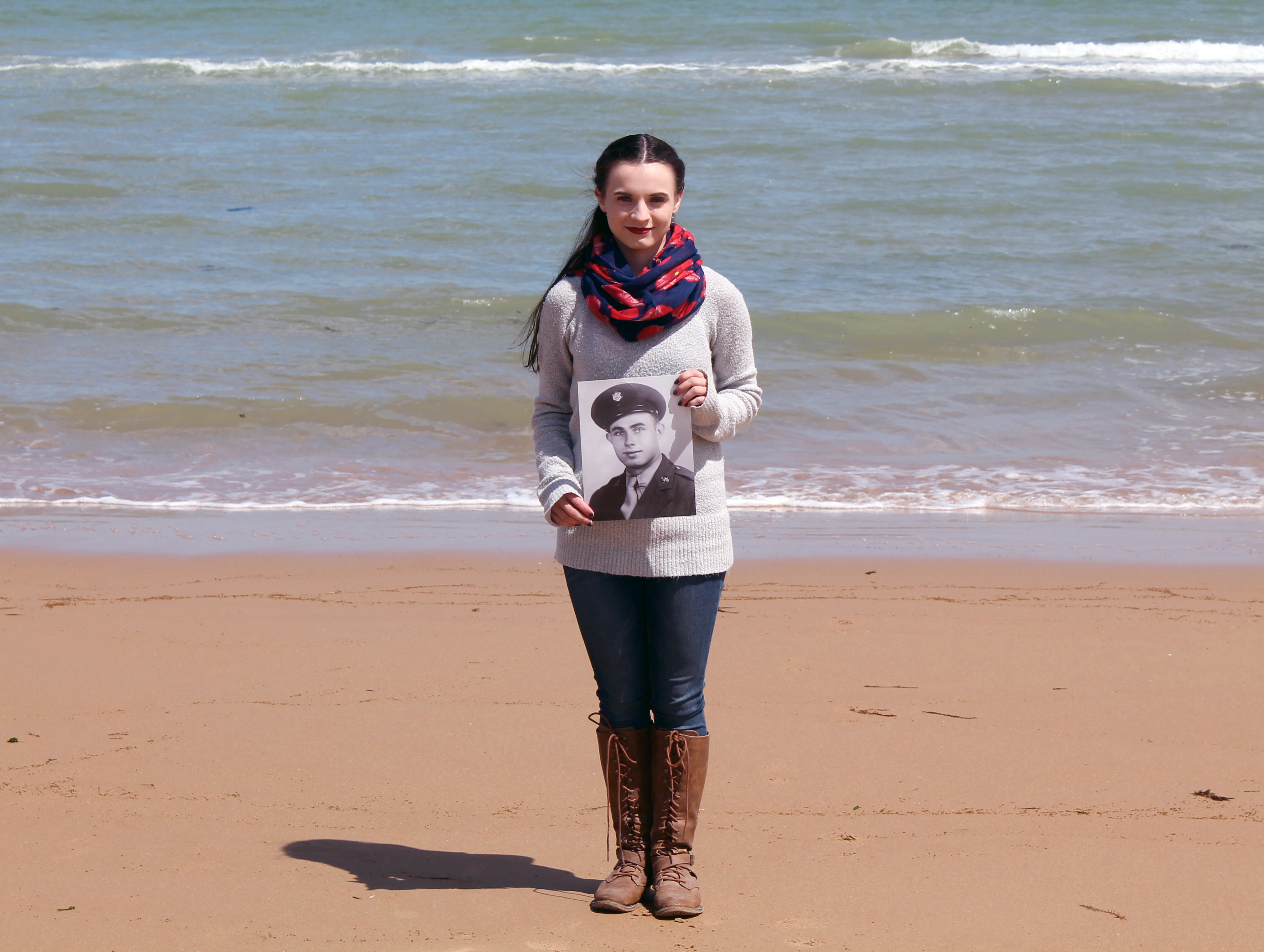 Kayla Jordan recently joined 17 other college students from around the country for a travel experience of a lifetime—the National WWII Museum’s Normandy Academy.

The native of Sweetwater, Alabama, who grew up visiting historical sites during family vacations and became docent of a small house museum at age 16, said this latest experience was a rare opportunity to immerse herself in the historical period of World War II.

“The museum was much larger than I initially realized,” Jordan said. “I feel like the tour really helped prepare us for the sheer scope and scale of this war and how it impacted, not only the particular region we were going to visit in France and what it meant to the French and Americans, but also to the English and Canadians and everyone involved.”

From New Orleans, the group flew to France to tour Normandy at Pegasus Bridge, where the first shots of the invasion were fired by British troops a few minutes after midnight on June 6. They also visited the Pegasus Museum and Grand Bunker Museum, learning of the missions that were carried out before the 1944 seaborne landings.

Their next stop was Arromanches and the Cinema Circulaire Arromanches 360 film. Projected in high definition on nine screens, the film tells the story of the Battle of Normandy and is a tribute to the solders from every country and the 20,000 civilians killed during this battle for the liberation of Europe.

“Watching this film and seeing how much WWII has impacted the world as we know it today was sobering,” Jordan said. “While in the states, the main focus was the impact of the war on Americans and our country, but here in France, we were faced with the realization that this was a war not just fought on battlefields, but in people’s homes, backyards and in their towns. Seeing it all up close and personal was quite surreal.”

The group also had the opportunity to visit private chateaus turned into Nazi headquarters and living space for German officers, and the La Cambe German Cemetery, the final resting place of more than 21,000 German soldiers as well as Longues sur Mer, the site of one of the only batteries of the Atlantic Wall with the guns still in place.

“War is more than battles and skirmishes,” Jordan said. “It becomes personal when you see how it affects those living in the towns and villages decimated by bombs and overrun with soldiers. But history isn’t one sided, it’s multi-faceted. One of the things I most enjoyed about this trip was how well-rounded it was. We didn’t just see and learn about the Allies but also gained some perspective from the German side.”

No trip to Normandy would be complete without exploring Pointe du Hoc, a prominent position along the coast of Normandy that was a focal point of the amphibious assault by U.S. forces during the early morning hours of D-Day. The cliff top is located between Utah and Omaha Beaches and sits atop overhanging cliffs up to 100 feet high.

Jordan said this part of the tour was particularly meaningful because her family believes this was the general location that her great grandfather, Noah Raymond Vick, may have traversed during the war.

“Unfortunately, he died before I was born, but I heard so many stories about him growing up, since he actually helped raise my mom and uncle, that I feel as if I know him,” Jordan said.

“He was a TEC 4, which was one of three U.S. Army technician ranks during WWII,” she said, "and he drove a two and a half ton truck. We also know he didn’t land on the beaches on D-Day, but the morning of June 7.”

Through additional research and the help of Nathan Heugen, director of educational travel at the WWII Museum and the primary tour guide/manager of the Normandy Academy, Jordan was able to determine that her great grandfather likely came on to Omaha Beach at the Easy Red sector, a little further away from the most severe fighting, where the sand was more compacted and would support such a large vehicle.

“It was one of the most incredible experiences I have ever had,” Jordan said. “I felt as if he [my great grandfather] was really there with me, and I thanked him for having been there 75 years ago. He truly is my hero, and I can only hope he would be proud of me.”

Jordan said she is grateful to Matthew Lavine, MSU associate professor of history and undergraduate coordinator, for passing along information about the student travel programs sponsored by the National WWII Museum. She plans to apply for a scholarship for the Warsaw Academy, another travel program sponsored by the New Orleans museum.

“Though I've always known I wanted to earn a graduate degree in history," Jordan said, "this trip has really inspired me to potentially specialize that degree to focus on WWII studies and perhaps either teach at a university or be a curator or head historian at a museum. I just want to be able to share history in a way that people can not only understand it—but enjoy it too.”