(MERIDIAN) - Matthew David Jackson of Newton has been chosen Mississippi State University-Meridian’s Outstanding Undergraduate Student for the Division of Arts and Sciences and the recipient of the Dennis J. Mitchell Award for Excellence. 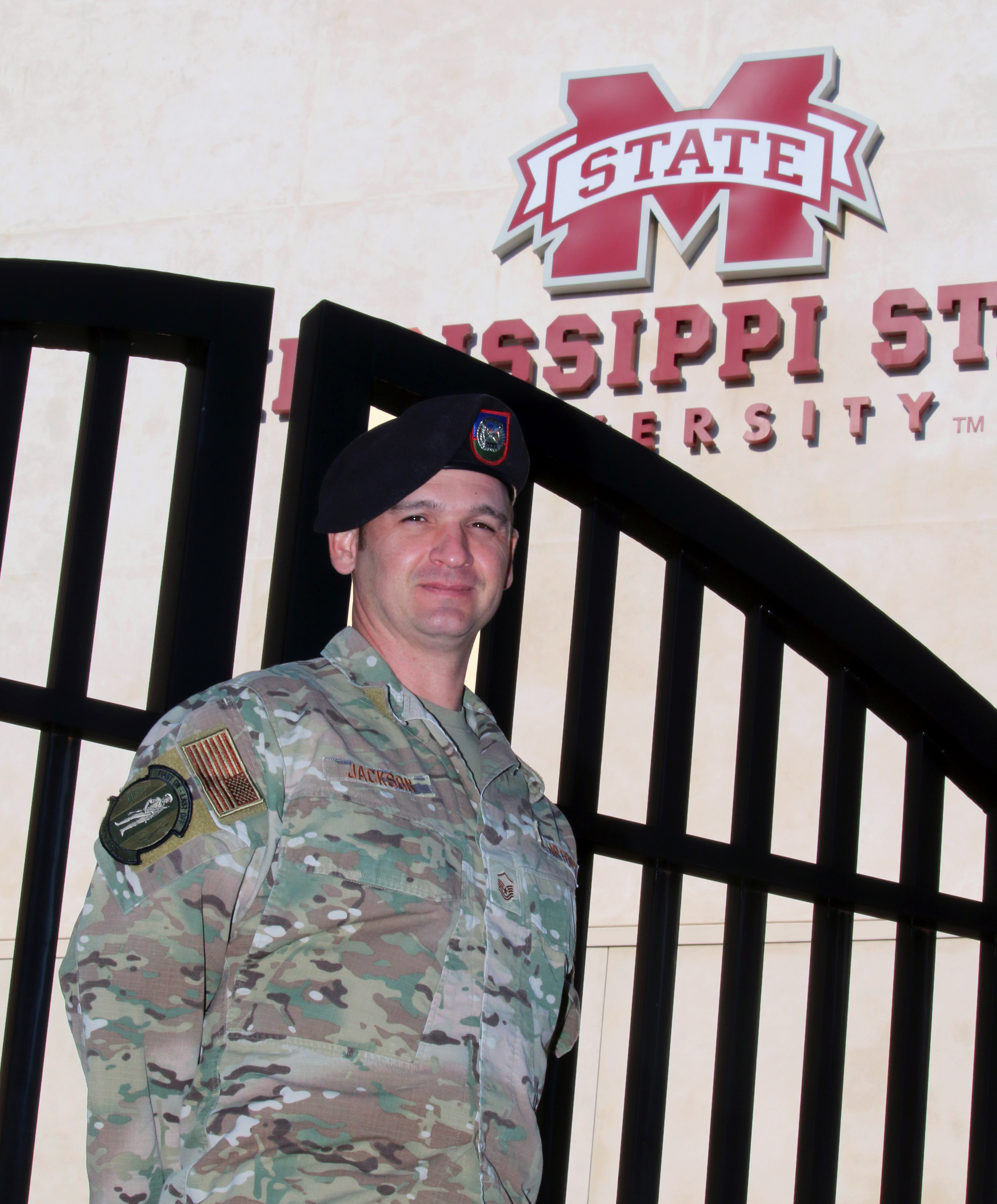 Jackson knew this was definitely something he wanted to be involved in when he learned that his squadron was part of the Air Force’s Special Warfare Branch. The branch includes Tactical Air Control Party airmen who imbed with Army and Marine units on the frontline, responsible for calling in air strikes within close proximity to friendly forces.

After graduating from United States Air Force training, Jackson spent 16 and a half weeks at the TACP technical school located at Hurlburt Field, Florida, near Fort Walton Beach. That’s when he began to fully realize what the special warfare side of the Air Force entails, including the intense physical, mental and technical training required to conduct missions.

“TACP school was by far the hardest, toughest thing I’ve ever done in the military,” said Jackson. “We started with 33 guys, and I think ended with 12 of the original starters and three wash backs (those going through the program again).”

Upon TCAP school graduation, Jackson was awarded and allowed to wear the coveted TACP beret. A month later he was married to the former Jenny Hollingsworth of Newton, all while continuing to work in the civilian sector for a directional drilling company.

In 2004, Jackson was deployed for the first time, and while serving in Iraq with the Army’s 1st Cavalry Division, 12th Cavalry Regiment, he witnessed the first free Iraqi elections. He returned from his deployment in spring 2005, maintained his combat mission readiness status, and received his certification as Joint Terminal Attack Controller (JTAC) in 2006. He then volunteered to go to Afghanistan in 2007 and got to call in his first air strikes while supporting the Army’s 10th Mountain Division from New York.

In 2008, Jackson was hired fulltime by the Air National Guard as a military technician and worked his way up to the rank of E-7. He also completed several of the Air Force survival schools and had the opportunity to complete the Army’s rigorous Airborne, Air Assault and Pathfinder courses.  Although he continued to progress while he trained, he wanted to move up in rank and his military career as well, so he decided to enroll in college to further his education.

“In the Air Force if you want move up to an E-8 or E-9 you have to graduate from the Community College of the Air Force [CCAF],” said Jackson. “So, at 30 years old, I decided it was time for me to go to school.”

He first enrolled at Meridian Community College and, after earning his CCAF degree, completed his associate degree at MCC in 2017. Jackson then decided to continue his education across the street at MSU-Meridian, enrolling in the fall of that same year.

“I’ve always been interested in and enjoyed history. In a way I’ve lived it, so I thought this degree was a fit,” said the former history major. “I also figured after my military career was over, I could always go back to school and get my master’s degree so I could teach.”

In 2018, after two semesters at MSU-Meridian, he was deployed and put his educational journey on hold. During his nine-month stint in support of the Mississippi Army National Guard’s 155th Armor Brigade combat team, Jackson first was stationed in Kuwait, then Egypt and Jordan, and spent four months in Syria. In the meantime, his fifth child was born.

“This is the only one of my five children that I wasn’t here for the birth, so I didn’t get to meet my little guy until I returned,” he said. “But I knew the work we were doing at the time was of critical importance to our nation because it was mainly our expertise and capabilities while embedded with a special operations joint task force that were helping to defeat ISIS.”

He returned to MSU-Meridian last year, and although he admits earning a degree while in the military, especially a special warfare unit, while helping raise a family has been challenging, he said it is doable.

“There were definitely moments where I felt like I didn’t have the time or I didn’t want to do the work, but I had to tell myself ‘if you really want it, you can get it done,’” he said. “Honestly, though, I feel like my wife is the one who needs to earn a degree or an award. She has been rock-solid through all of this, especially the times I had to crunch work, school and deployment. I can’t thank her enough.”

Now he’s looking forward to spending more time with his wife and kids, while continuing to serve his country with honor and distinction.

Jackson takes pride as the first career military member in his family, as well as the first to graduate from high school. His awards and accolades received over the course of his military career are an additional source of pride for him, but Jackson said he now also feels a deep sense of accomplishment and satisfaction knowing he has earned his MSU-Meridian diploma as well.