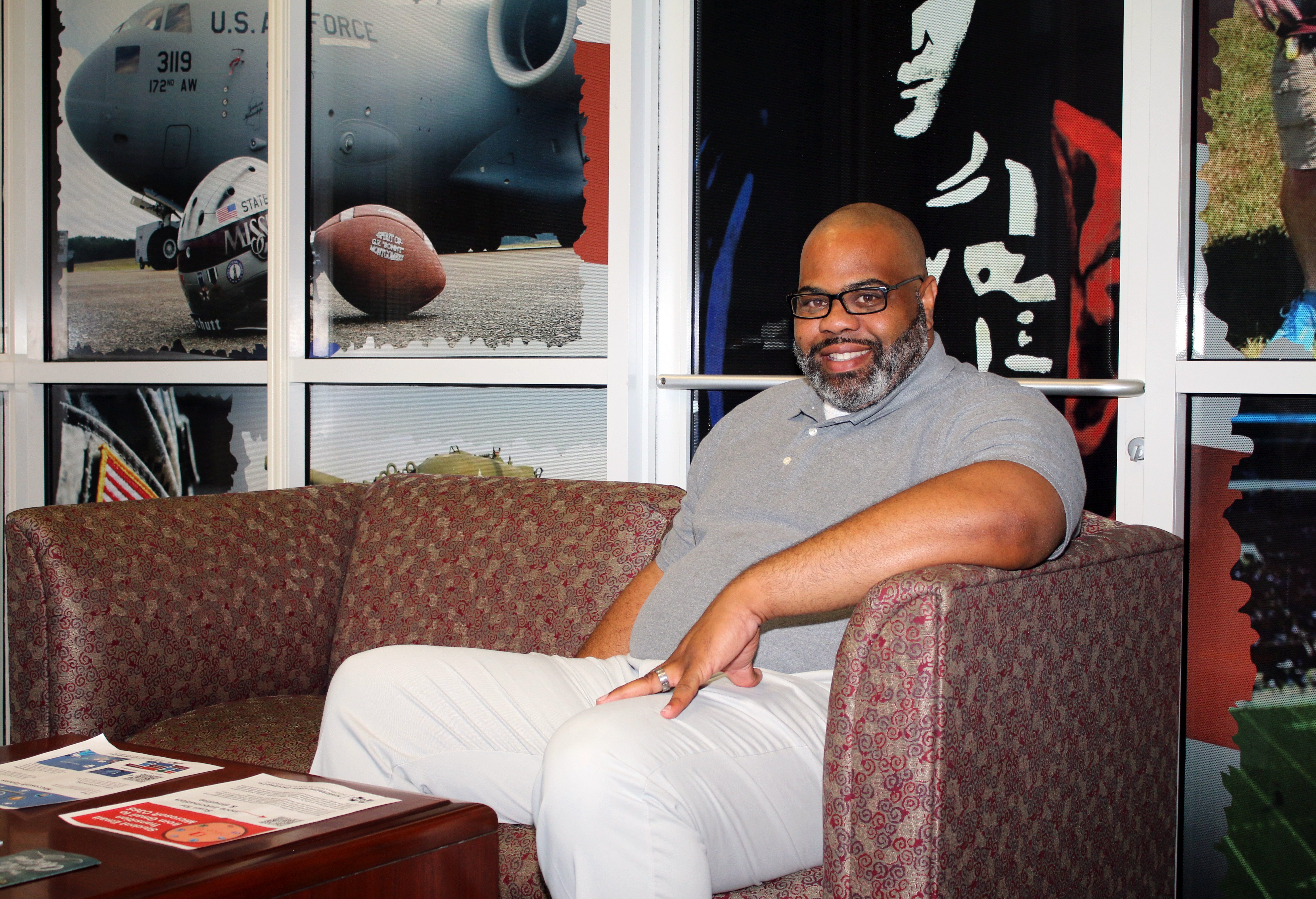 MERIDIAN, Miss.—Growing up, Karsten Taylor never thought about career options such as joining the military or serving others. He just wanted to stay out of jail.

Taylor, a senior social work student at Mississippi State University-Meridian, was born on Lakenheath Air Force Base outside of Suffolk, England, where his father was stationed. The family eventually moved to Oklahoma and, after his father retired from the military, they settled in Midwest City, where Taylor graduated from high school in 1995.

When he was 19, Taylor became a father, dropped out of college and spent the next few years working in various bakeries around town until he was fired for being late “one too many times.”

“My dad saw the road I was going down and basically told me, ‘Son, leave, join the military and don’t come back,’” Taylor said. “Although I’d always joked the military didn’t need any more Taylors, since my dad had served and two of my older brothers were serving at the time, I took his advice and enlisted, joining the U.S. Navy in 2001.”

Military Life
Taylor’s first duty station was Kingsville Air Station in Kingsville, Texas, where, as a junior air traffic controller and facility watch supervisor, he was responsible for all activity on the airfield including the control tower. After Texas, he was stationed in Virginia Beach, Virginia, where he spent three years with Tactical Air Control Squadron (TACRON 21) which has a mission of providing centralized planning, control, coordination and integration of amphibious and expeditionary combat air operations. While there, he was sent briefly to New Orleans in 2005 to help in the wake of Hurricane Katrina, completed a six-month deployment to the Persian Gulf and eventually transferred in 2008 to NAS Meridian, spending five years there.

While at NAS Meridian, he met LaShasta Metts whom he married in 2012. One year later, the couple transferred to Fleet Air Control and Surveillance Facility in Jacksonville, Florida, where they began working in The New Life Church prison ministry.

“I’ll never forget the first time I went to this one prison and a prison guard said to me, ‘I treat these women with just as much respect as I would want because there are things I did in my past that could have landed me here but by the grace of God, they didn’t,’” Taylor said. “That stuck with me, so when I would go to help conduct services or hold Bible studies at the different facilities, I would always have that in the forefront of my mind. In a sense, I felt it was my duty, my obligation to give those incarcerated a glimmer of hope, to let them know someone cared and better things were possible—because like that guard, there were things I did in my past that could have landed me in jail—but for the grace of God and my dad’s advice, they didn’t.”

A Second Career
Taylor and his family left Florida in 2015—after his 14 and a half years in the military and an honorable discharge—and settled back in Meridian to be closer to his mother-in-law. He then began working at the Veterans Memorial Cemetery in Newton as a veteran’s service officer, scheduling services and helping families with setting up arrangements for their loved ones. It was about this time that Taylor said he really began thinking about his future.

“I knew I was ready for a second career, and I thought about social work. My mom was a social worker in Georgia until she passed away in 2010, and I realized, in one way or another, I had been helping people most of my life,” he said. “By becoming a social worker, I could continue to help people better themselves and overcome their obstacles. I truly felt the situations I’d faced, dealt with and learned from might help those who felt defeated by their current life problems and issues,” he added.

Three more years would pass before Taylor enrolled at Meridian Community College in 2018  to begin his prerequisite coursework for admittance into MSU-Meridian’s social work program. Determined to start the program the following fall, he finished his associate degree at MCC in one year, in part due to military credits, as well as carrying 23 credit hours his last semester. As a reward for his hard work, Taylor was one of 34 students chosen in spring 2019 for MCC’s Circle of Excellence.

“When I first started at MCC, I was scared because it had been so long since I had been in school. But once I got used to the regimen, God gave me the ability to do well as far as my grades,” he said. “Starting a second career isn’t easy, but I’m here to tell others, ‘don’t ever put anything past yourself. You can be whatever you want to be; you just have to put in the time and work for it.’”

Taylor’s junior year at MSU-Meridian included some unexpected challenges due to the pandemic, but it also brought some new opportunities. Angela Savage, an MSU-Meridian instructor and director of field social work, asked him to participate in a Zoom call with the Mississippi chapter of the National Association of Social Workers. As a result, Taylor was asked to begin facilitating a student-led group, with a board consisting of 13 students from MSU’s Meridian and Starkville campuses, as well as the University of Southern Mississippi, University of Mississippi, Mississippi College, and Mississippi Valley State, Jackson State, Belhaven, Alcorn State, and Delta State universities.

Together, with social work professors acting as overseers, they are working to find solutions to police brutality, systematic racism and social injustice through discussions and actively engaging students on their respective campuses.

“I was really excited for this opportunity, and I’m so proud that we now have in place a student board that meets twice a month via Zoom,” Taylor said. “Our first concerted effort has been to focus on voter registration and encourage folks to cast their vote and have a voice.”

A Drive to Serve
Although he hasn’t worked this past year in order to concentrate on his studies, Taylor isn’t one to be idle. He still referees private school football and basketball games. He and his wife act as spiritual advisors for Sober Living Residential, which provides safe accommodation for people who need continuous sobriety support, as well as Residents of Hope, which serves those coming out of incarceration.

“I’ve really loved my time at MSU-Meridian; the small class sizes and the interaction with my instructors and professors, and the excellent staff who have helped me along the way, whether in veterans services, advising or financial aid—they’ve all been great!” Taylor said. “But I’m more of a hands-on person, so I’ve enjoyed taking the knowledge and things I’ve learned in the classroom and using them in my field placement this semester,” he said.

Taylor was notified in early January he would be working with Wesley House Community Center, Inc. The non-profit organization, located in Meridian, is a member of the National Children’s Alliance and Children’s Advocacy Centers of Mississippi.

“I believe God has paved the way for me to be on the path I’m on. He’s blessed me with a wife who supports me and he’s provided me scholarships, so I could go to school debt-free,” Taylor said. “I believe I’m going to get to bless someone in the field of social work whether it be working with children, the prison, mental health or possibly coming back somewhere down the line as an instructor.”

“That’s all I want to do,” he said. “When my time is up and when God decides to call me home, I want to be sure that I’ve done everything that He needed me to do here on earth.”