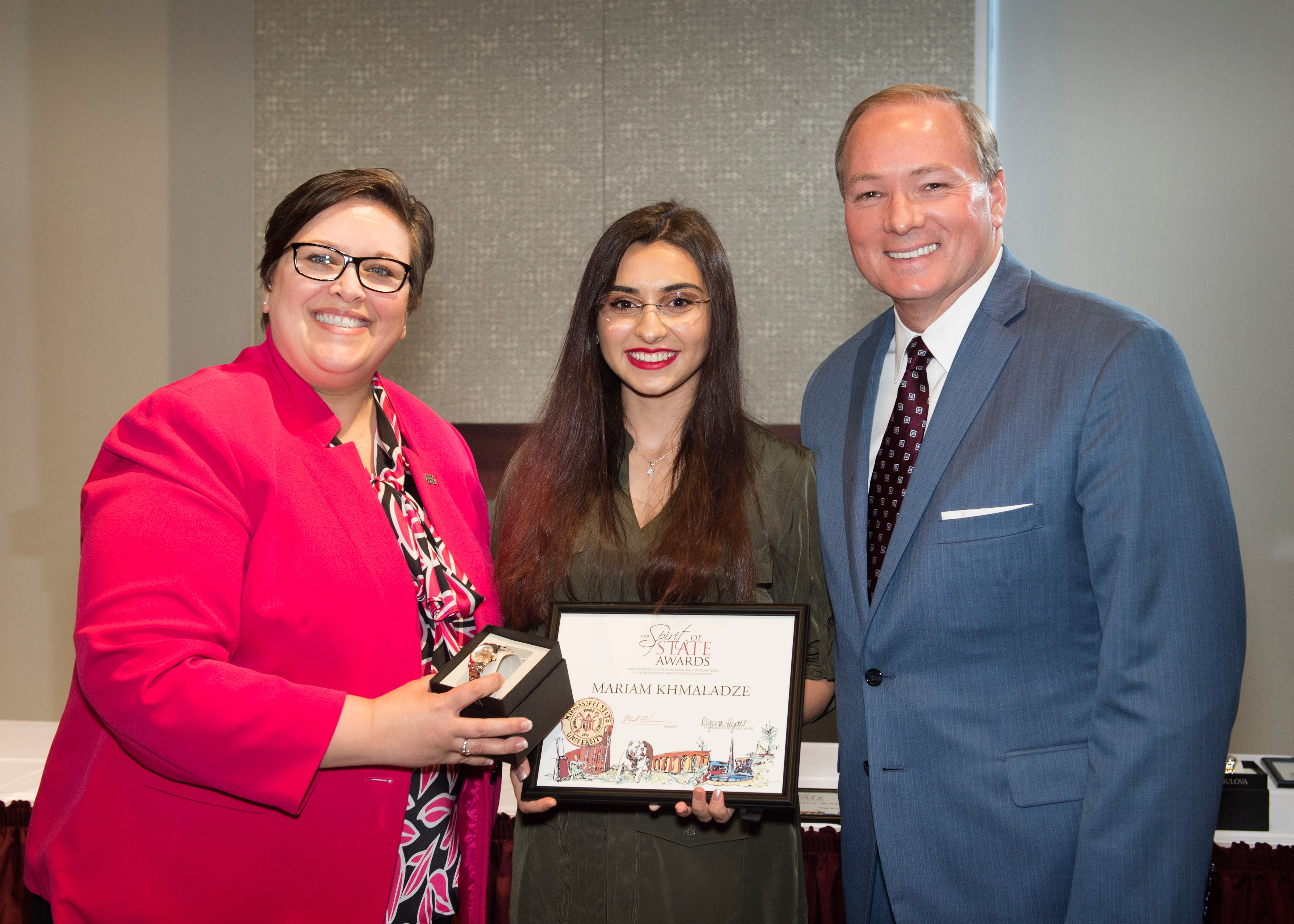 Mariam Khmaladze of Meridian is among 14 MSU students honored. The senior business administration major was recognized as MSU-Meridian’s 2018 Spirit of State Award recipient during a ceremony held Friday [April 20] on the Starkville campus.

Now in its 13th year, the Spirit of State Awards program, organized by the university’s Division of Student Affairs, formally honors those who have made a positive impact on peers and the broader campus community through organizational involvement, service to the institution and personal actions promoting school spirit and tradition. Those selected have been nominated by either faculty and staff members or fellow students. A minimum 2.25 grade point average and good academic and disciplinary standing within the university are among the eligibility criteria.

Khmaladze, who moved to the United States from the Republic of Georgia four years ago, was nominated for the award by William Hill, associate professor and head of the Division of Business, as well as numerous other students both in Meridian and Starkville.

“In the 13 years I’ve been with Mississippi State, I’ve never met a student that embodies the characteristics of this award more than Mariam,” Hill said.  “She is not only an outstanding student academically but she brings her delightful personality and charm to everyone she meets,” he added.

“Mariam is very involved in every aspect of campus life, and I believe she inspires other students to perform to their full potential because of the excitement she has for being a student at Mississippi State and her appreciation for the opportunities the university has provided her,” said Garret Slay, a business student and classmate.

Khmaladze said, “This award is such an honor for me, and it makes me very happy that other people see this in me. This past year I feel like I have finally come out of my shell and I’m back to my old self, the way I was growing up in the Republic of Georgia.”

Transitioning to the U.S. at 18 years of age was exciting at first because “everything was so new, and I was just happy to be reunited with my mom again,” she recalled.

However, as time passed, she became homesick for her country and friends.

“I cried a lot after moving to Meridian, not only because culture shock had set in, but I couldn’t just get out and explore and do things like I did back home because I couldn’t communicate with people, and I wasn’t familiar with the area,” she said.  “I ended up spending hours by myself every day trying to become more proficient in English.”

With her parents' encouragement, she eventually enrolled at Meridian Community College where she was an MCC Circle of Excellence recipient.

Continuing her academic excellence at MSU-Meridian, Khmaladze was inducted into Phi Beta Lambda Business Honor Society and Phi Kappa Phi Honor Society and is a Mississippi State Student Success Scholar and President's List Scholar.  She was also selected Outstanding Undergraduate Student in the division of Business for 2017-18.

Not content to just excel in the classroom, she got involved with the local Habitat for Humanity in Meridian and then became a volunteer with the Maroon Volunteer Center in Starkville, traveling weekly to work with the Starkville Habitat for Humanity and Palmer Home Thrift Store. For her dedicated commitment to serving others, Khmaladze was recognized at this year's MSU Volunteer Awards Banquet as Student Volunteer of the Year, and she received the Community Service Excellence Award for completing over 100 hours of volunteer service over the past year.

In conjunction with MSU-Meridian’s Collegiate DECA chapter, she also implemented a recycling project on the Riley Campus in downtown Meridian and, as a result, was the winner of the Mississippi Recycling Coalition and the Mississippi Beverage Association Scholarship.

“Mariam is tireless, not only assisting with any and all community service projects the chapter is involved in, but she is always ready to provide assistance to other students and uses her energy to promote student growth and retention,” said Steven Miller, a business student and Collegiate DECA chapter past president.

Khmaladze, who placed first in the International Marketing division at the statewide Collegiate DECA competition, traveled this month with fellow organization members to the International Collegiate Development Conference in Virginia, where she received an award of excellence, as well as the Academic Honor Award, which recognizes members for their academic excellence (3.5 or better GPA), leadership and involvement.

“We have truly enjoyed having her as a student at MSU-Meridian; she is such an engaging advocate for our campus,” said Hill. “I can’t think of a more perfect example of a Spirit of State Award winner than Mariam,” he added.